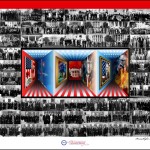 An Asian American Artist from Michigan made it all the way to the White House!!!

Dominic Pangborn, Past Chairman of CAPA Advisory Board had his most recent evolutionary artwork unveiled at the White House in October by President Obama and the First Lady for the White House Fellows 50th Anniversary celebration.

Dominic Pangborn is a celebrated Korean-American artist and designer. His style is best-described by critics as “evolutionary” as it is constantly changing. Change has been a constant theme in Dominic’s works. Never content to settle into a single style, technique, or medium, Dominic continuously evolves to find the right form for his artistic expression from paint and clay to fabric and pixel.

CAPA extends its congratulations to Dominic for such an esteemed accomplishment. We are proud of you!!!